Rockets was released on the Dan-Ball site on April 16th, 2006. (though the game already existed in ha55ii's blog prior to the site release) Rockets is the very first Dan-Ball Web game. 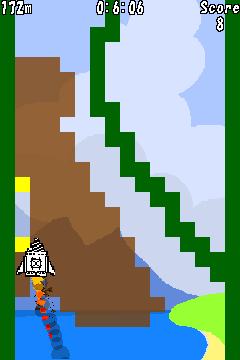 In this game, the player is in control of a rocket. In each level, the rocket must get to the goal in order to complete the level. The rocket always points to the cursor and left-clicking is used for thrust, which accelerates the rocket towards the cursor.

There are 6 stages in the game. Stages 1-3 have a sky background, while Stages 4-6 have an underwater background.

There are three different colored blocks in the game.

When a level is completed, the time taken, score, and ranking is shown. The ranking is judged on how fast the player completed the level and how many coins the player picked up.

Retrieved from "https://danball.fandom.com/wiki/Rockets?oldid=101501"
Community content is available under CC-BY-SA unless otherwise noted.