View source
Welcome to Dan-Ball Wiki
The wiki about Dan-Ball(ダンボール) that anyone can edit. Please register for an account and read over the Rules and Guidelines, Manual of Style and Neutral Point of View before contributing.

6 August, 2021 - FANDOM Update on Wiki Theming
FANDOM, the wiki hosting service provider of this wiki, has updated the wiki theming design to a new one called FandomDesktop and the old designs will retire starting from 9 August 2021. Please note that while we have updated our design to be compatible with the new theming, some display bugs may be possible. Please feel free to report such issues to our administrator responsible for maintenance.

20 August, 2020 - Wiki Software Update by FANDOM
FANDOM, the wiki hosting service provider of this wiki, has updated our wiki to a new platform with updated software. Please note that some pages across the wiki may be broken by the new update, and feel free to fix these issues or report such issues to our administrator responsible for maintenance.

Not sure where to start?

6 August, 2021 - Contents on PG/PG2 Uploaders
Please participate on the ongoing discussion regarding the suitability to describing PG/PG2 uploaders in our Wiki.

Characters in Stick Ranger refer to the four stickmen that the player controls in the game. Characters have identical structures: a beige outlined square head, two hands, two legs and a body. While there doesn't appear to be a neck, the head is indeed connected to the body. When starting a new game, the player's first task is to assign each of the four characters a class. Thereafter, each character will have their own stats. (more) 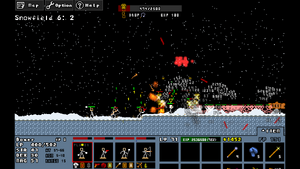 A team fighting enemies in Snowfield 6 in the mobile app edition of Stick Ranger. 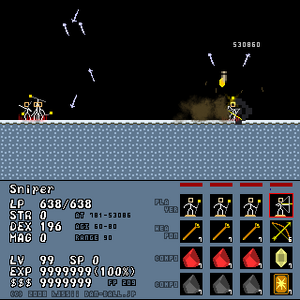 The maximum possible damage achievable in the game Stick Ranger.

Our sister wiki, the Fan-Ball Wiki, is a wiki focused on fan-made ideas for Dan-Ball games and other community works such as stories.

At last! A place to talk about anything and everything related to Dan-Ball! Featuring boards on all Dan-Ball Games and a friendly community, the Dan-Ball Forum!